Round 1 of the Tri Series with Colac and Ballarat was raced on the weekend. Gail winds, rain and even snow, as reported by the locals the day before had passed and a perfect day for racing was had. Light winds and bright sunshine were enjoyed by all riders on the Meredith circuit. A strong presence of Geelong riders in B & C grade ensured Geelong heads in to round 2 at Dereel hosted by Ballarat with a commanding 18 point lead over BSCC.

After just returning from his Belgium adventure Nick Squillari, a strong supporter of club racing wasted no time in strapping on a number. Along with Kris Hink they were GCC’s sole representatives but this didn’t stop them from dictating affairs. Kris used his power to break away solo forcing the BSCC riders to chase. After his capture Nick was able to enjoy the ride before launching a strong attack up the rise on the last lap to take a clear victory. Nick was full of praise for his team mate’s ride that helped him secure the win.

B grade was a tactical affair with Mark Bellew (GCC) & Guy Fella (BSCC) breaking way early. GCC tried without success to get riders across to the front pair. BSCC were more than happy to pull the rider trying to bridge back into the fold. This proved costly for GCC as an underdone Mark Bellew on his return to racing after a long spell was beat in the sprint. Grant Blake showed he hasn’t lost his speed taking the bunch kick for 3rd.

Geelong put on a dominant display in C grade, using both their strength in numbers and sound tactics to control the race. Piers Nyholt broke away late on the first lap, before realising the potential of a painful solo ride ahead. Geelong’s strength and the undulating course saw a number of the Colac riders drop off leaving the GCC riders to fight it out. In a return to form after some injury it was Barrie Kinnersly who saluted. Piers was second with Daniel Cavell third.

Well done to Kaitlyn Schurmann who rode strongly over 32K. Also special mention to new member David Purcell who was determined to finish his first race with the club despite losing contact with the bunch.

After the first round Geelong holds a strong 18 point lead over Ballarat. Round 2 is at Dereel on Saturday afternoon. See the event calendar for details. 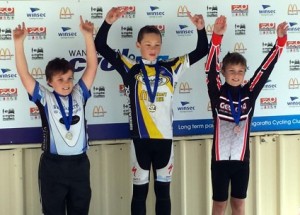 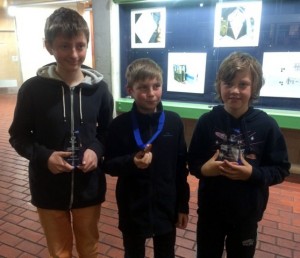 The weekend was very cold but the sun was finally shining for a Junior Event.  There were huge fields in all events and the Under 15 Boys having 40 competitors.  The races were fast with the Juniors U13 boys averaging 35.5 km/ph for 15km races and Bryce finishing 10 seconds behind the winner.  The speed and skills of the Juniors is amazing and it was great to see two of the Juniors Fraser Clark and Kane Bridger winning Aggregate Trophies for the Winter Series.