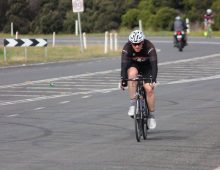 Twilight Crit Series Final Standings. After 6 weeks of exciting racing in the Twilight Criterium Series we can reveal the final standings in the series. Riders best 4 race results from the 6 race series counted towards the overall standings. A new addition this year was the Bakers Delight Sprint Primes attacking bonus points that counted towards the individual’s final point’s telly. After very consistent performances in all races, including a couple of wins, Travis Edwards finished the series in first place. Travis carried on his strong form from a great ride in the Melbourne to Warrnambool to take the honours. Rising star of the club, Lincoln Clark finished second only a handful of points behind Travis. Lincoln successfully made […] 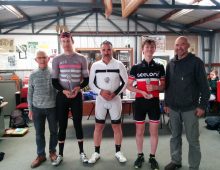 The 2017 road season wrapped up over the course of the last month with some great racing. Club Championships After finishing 3rd in the road champs and winning the time trial Tom Paton was crowned the 2017 Club Champion. Tom has again the honor of wearing the #1 race number for the next 12 months. In the women’s, Danni Bridger held daughter Molly courtesy of a superior time trial to win the women’s title. Ross Bush A high quality but small size field raced the 2017 Ross Bush Memorial Handicap. A scratch bunch that included past & present club champions plus a Warny winner were always going to be hard to hold off. Colin Smith riding off limit lost his […] 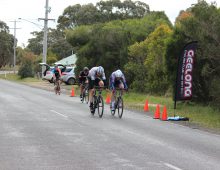 Maude was the venue for the 2017 Club Road Championships. A late change in course to avoid the overly aggressive wild life this time of year saw rider’s complete laps of the tough Maude/ Steiglitz/ She Oaks loop. Small but quality fields in all grades hit the start line and despite the testing hills bunches remained largely together. A grade & for the title of club road champion was raced over 4 laps and despite a solid tempo no rider was able to make a decisive break or split. The quality of the riders and evenness of their abilities ensued that the races was going to come down to a bunch kick. Coming around the final bend to the line, […]

The Spring Eve Handicap at Point Henry kicked off 5 minutes early in what could be a first for GCC. As is typical for the exposed Point Henry course, the wind continued to build as the 45K handicap was raced. All bunches had the chance to gauge their progress in the race over the 8 lap hot dog course. The wind played havoc with the front bunches which split up early on. But when when 2nd & 3rd scratch combined to form a well organised bunch it looked like Scratch may have their work cut out to catch them. After the combined 2nd & 3rd scratch bunches found the front of the race with two laps left it looked to […] 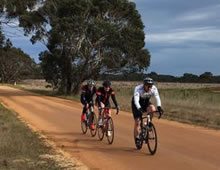 Hell of the Surfcoast

Not the hell like conditions expected for the 2017 running of the “Hell of the Surfcoast”, but testing all the same with the usual corrugations and loose dirt on the last section keeping riders honest. Good numbers in all grades and lots of attacking made for a great morning’s racing. A small but high quality A grade field saw some of the best local off rode talent take on the traditional roadies. Tom Ovens taking the win by a small margin over inform rider Trent Clifford. In B grade Stephan Van der Bruggen lead by example for the rest of his Geelong Performance Crew by taking his long awaited maiden cycling race victory. After some long range solo moves early […] 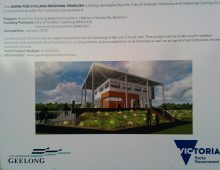 Fantastic news, construction has started on the new ultra modern $1.4 million Cycling Pavilion at the Belmont Criterium Track. It is due to open in January 2018. Joint funding by the Victorian Government and City of Greater Geelong was approved on 9th October 2013 after “Council funded the feasibility study from the Community Priority Fund after extensive consultation with the Geelong Cycling Club.” Congratulations to Geelong Cycling Club President John Burtt for his role on the Steering Committee in making this vision become reality. The new Pavilion will become the hub of Geelong Cycling Club and the general cycling community in Geelong. Parents will be able to watch in comfort their children train and race. The building will also house historical […] 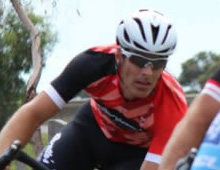 Due to a number of factors that have been out of Geelong Cycling Club’s control, we have had to make a few adjustments to the racing calendar in March, including a change of venue and date for the Club Criterium Championships. The Club Criterium Championships will now be raced on Saturday the 5th of March at Eastern Gardens. All the event details can be found on the event calendar. We sincerely apologies for the late notice. It is something that we do our best to avoid, however there are extenuating circumstances that have lead to this last minute change. The combination of a late change of venue for the Victorian Criterium Championships and the late moving of the Mansfield Tour to […] 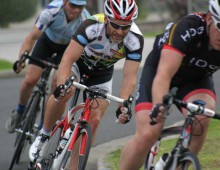 The four race New Year Criterium Series kicks off on the 30th of January with a twilight crit at Belmont. For this series we have team up with MCL (Melbourne Cycling League) to help promote and expand the series. This partnership has allowed us to offer a large prize pool for the top 10 in the series. As a result of this partnership we have introduced a New Year Criterium Series Pass for riders who don’t already have a season pass. At $40 ($15 casual race fee), this represents great value for money for riders looking to participate in this exciting series. By purchasing a series pass you will be automatically entered into all four races in the series. The […] 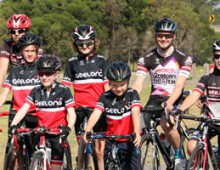 As most members would now be aware Oliver (Ollie) Kent-Spark has fulfilled a lifelong dream recently signing his first pro contract with Irish registered UCI Continental team An Post-Chain Reaction Sean Kelly Cycling. The team was founded by Irish Cycling Legend Sean Kelly in 2006. Many would know recognise Sean’s distinctive voice and commentary style on some of Europe’s biggest one day races. Ollie will be teaming up at An Post-Chain Reaction Sean Kelly Cycling with long-time friend, past Herald Sun Tour winner Calvin Watson. Calvin has raced the past few seasons at Trek Factory Racing. Ollie is now enjoying his last few weeks training down under before he heads overseas early in January. Ollie will be racing the National […]

Despite being in the depths of a cold winter there has been a flurry of racing action in the past few weeks at all levels, local, state and national. Below is a quick wrap up of how some GCC riders have gone. National Cyclocross Championships Congratulations to Tom Ovens who finished 9th on the weekend in the 2016 Australian National Elite Men Cyclocross Championships. Combining both his outstanding MTB skills and road craft in his first season racing CX. Great effort Tom! Victorian Time Trial & Road Race Championships Last weekend the Victorian Time Trial & Road Race Championships were held in Lang Lang. Congratulations to new state Time Trial Champions Peter Quibell (M6) & Doug Barrett (M9). Also a podium […]