2018 has started off with a bang, the grand opening of the new home of cycling and some great racing in the first 3 races of the new year.

Below is a snap shot of the racing so far;

A fabulous evening at the Belmont Criterium Circuit with the grand opening of the new Home of Cycling Pavilion. A significant day in the Geelong Cycling Club’s long history.
After a ceremonial lap of honor the 2018 racing season kicked off. There was a great crowd on hand for the occasion with a large group of juniors getting things underway. The hot conditions saw many red faces but some close racing. Xavier Starling the first across the line.
The social race E Grade, was a respectful race with the group staying together, Stew Atchison taking the win.
A large D grade field hit the line with some aggressive racing throughout. Many riders showing the effects of some K’s in the legs over the past month. In the end it was new rider Adrien Limsotin taking the win from the consistent Anders Stenhouse & the back in form Sasa Jurkovic.
In C grade the pace was on all race, Steve Douglas doing a lot of work on the front as has come to be expected. But it wasn’t enough to shed Nick Lanham who took the win with his fast finish ahead of Steve and Daryl Sutter.
It was more of the same in A & B grades, big fields in both races and some fast and action packed racing. Despite a number attempts off the front by riders none stuck with a strong head wind on the back straight hampering progress. As expected the race finished in a sprint, Dan Hall proving the fastest followed by Nathan Wilson & Kane Arey.
It was a brutal race in A grade with a number of strong riders lining up. The pace was on from the gun with a number of breaks forming throughout the race. It was a war of attrition with the searing pace seeing riders dropped. The decisive break was formed by Nick Squillari and Marcus Wettenhall who was returning to racing after a long spell. Nick ultimately won solo by a handful of seconds with Marcus taking second. Jason Marsh sprinting to 3rd place from bunch a few second further back.
Thanks for all the riders and supporters that came out to enjoy the occasion. Racing returns next Saturday morning at Belmont, see the website for race times and entries.
Full race results; https://results.sporthive.com/events/PC1490543
Filter results by class for individual results.

Another great morning for the 2nd round of the summer crit series. Round 2 was again held at the Belmont circuit, this times riders were racing over the full course with a south/ east wind making it tough going up the back straight.
Again, large fields lined up for in C & D grade with U15 junior riders Fraser Clark & Bailey Wilson joining in on the back of D grade. We again welcomed a number of first timers and new members to racing.
Both C & D grades were aggressive races with a number of riders trying their luck off the front of the bunch at various stages throughout the races. In C grade up and coming junior Harry Clark found himself with a big gap early on, but with 40+ minutes of racing still to go it was going to be a tough ask. Despite a flurry of attacks with the strength of Steve Douglas driving the bunch it always came back together. With a couple of laps to go, Sam Phillips made a promising solo break for the line, but again he was caught, only to see Daniel Cavell launch what looked like a race winning move with under a lap to go. However the Pres (John Burtt), unleashed his trademark fast finish down the finishing straight to take the win by a clear margin over Nick Lanham with Harry Clark coming home 3rd.
It was a similar tail in D grade. Many riders testing their legs off the front trying to make a decisive break. The strong pair Colin Smith & Anders Stenhouse did get what looked like a good gap around the midpoint of the race, but again the bunch was not willing to let them go. The strong pace of the race saw a number of riders lose contact late and the field splinter. In the end first time racer with the club, Joel Bretram took the win. Colin Smith 2nd and showing the signs of a few K’s on the bike over the summer. Sasa Jurkovic coming home in 3rd place proving his form is returning quickly.
A small than usual field in B grade hit the start line with the first 20 minutes of racing being solid but controlled with riders sharing the load. A few squirts off the front never amounted to anything, but it was not long be for the Wilson’s (unrelated) Nathan & Daniel cracked open the field getting off the front. The rest of the bunch that had now splintered were unable to join forces to chase them back. Cooperation between the two was good until the last 600m with Daniel breaking for the line through the last corners, Nathan keeping his powered dry for the final tail wind finishing straight to wind up his sprint. It was a desperate throw to the line by both riders, but despite Nathan carrying far more speed to the line Daniel held on by 0.012 for the win. Nathan 2nd with Pat Kelly battling alone to take 3rd place.
Another strong field lined up for A grade including current club champion Tom Paton. Pace was high throughout the race with the likes of Travis Edwards & Nick Rhodes providing plenty of punch on the front. As was the pattern of the day there was no breaking away from the strong field. Once the lapboard came out with three to go the pace really ramped up stretching the field. As seems to always be the case, Tim Bennett found himself in the right position late and duly saluted, no one being able to match his finishing speed. Mid race sprint prime winner Peter Arch was second and new rider Brad Frost who self-promoted to A grade came home in 3rd.
Well done to all riders who supported the event. Full race results can be found here;
https://results.sporthive.com/events/PC1491367

The storms that hit Geelong Saturday afternoon bypassed Ocean Grove to ensure that racing at the popular Ocean Grove circuit got underway. A large number of people got to along to watch the racing around the 600m circuit, and it didn’t disappoint.
E Grade and the GCC juniors kicked the evenings racing off. The junior event was hotly contested; Henry Atchinson, Bailey Wilson & Fraser Clark setting a strong tempo working turns throughout the race. Fraser was able to break clear on the last lap to take the win. The 3 averaging over 30kpH during the 25 minute race. Special mention to Luke Neale who road with great conviction despite losing contact with the leading trio early on to finish on the same lap despite riding solo. Racing E grade was Kaitlyn Schurmann, the new Australian Para Cycling Time Trial Champion (Women Cycle WC1), it was great to see her back racing with the club.
There was plenty of action in D grade, Colin Smith taking off as soon as the flag dropped in his now familiar manner. Once the bunch brought him back to the fold some normality ensued for some period. Although the bunch was often strung out under the constant changing of pace. Late in the race Greg Mervin made a solo bid for the line and with plenty of encouragement from his kids on the side line was able to hold the bunch off to take his first win. The minor places were filled by Colin Smith & Curtis Pilcher. D grade averaging a solid 36kpH for the race.
There was some exciting racing in C grade, the speed was high as riders were happy to try their luck off the front throughout the race. One of those riders was Daniel Cavell, showing his form was returning with a solo bid for the line. New comer Adrien Limsowtin as active through but in the end it came down to a bunch kick. Young Harry Clark had a game plan, follow the Pres (John Burtt) at all cost. A sound plan given the Pres’s near perfect record at the venue. Joel Bretram look to spoil the party showing some last lap speed, however with his mates on the sideline watching the action and calling for a lift in grade, he wasn’t to be beaten. John first, Harry second & Joel hanging on for third. C Grade averaging 37kph for the race.
B Grade has a couple of riders, Nick Lanham & Sam Phillips make the jump in grade for this event which also saw the return of Jamie Werner & James Stokie to racing. There was no lack of speed throughout the race with the average speed over 39kpH. This high speed would usually make a solo win impossible but that is exactly what Connor Flett was able to do. Making a break when the bunch soft pedalled for a moment. With the crowd cheering the highly talented junior MTB rider on he was able to hold them off riding a consistent pace over the last 10 minutes of racing. Ben Andrews did his best to pull the break back with some powerful turns but the cooperation just wasn’t there. Sam Phillips crossed the line second some 10 seconds back with Nick Lanham 3rd. Another great race for those on hand.
A large and super strong field lined up for what should be the show piece race of the evening, A grade. With such a stacked field there was plenty of action for all on hand. Throughout the race a number of small and dangerous looking groups were able to steel a small gap but the strength in the bunch was always able to bring it back together. This was the pattern of the race, attack and regroup but at no stage did the pace relent, with the race average speed being around 41.5kpH. With 10 minutes to go Nick Rhodes was able to get off the front solo holding the bunch at bay for a handful of laps. Likewise Jason Marsh found him off the front with around 5 laps to go, with the bunch now showing signs of the relentless pace he was able to hold them off for a period. However when the 3 laps to go board came out the pace wound up swallowing Jason’s bid for victory. There was plenty of jostling for position in the last laps, thankfully all riders got through okay setting up a frenetic sprint. Again it was Tim Bennett who took the victory, former national top 10 time trialist Marcus Wettenhall 2nd and Jared Bailey 3rd in his first outing in a while. The last lap done at a scintillating 51.8kpH. The race was a great spectacle for all those that stuck around.
Full race results; https://results.sporthive.com/events/PC1492775
Thanks to Belmont Bakers delight for the post race snags, the competitors and spectators that came down and enjoyed the evening.

Looking forward to seeing everyone at Torquay next Saturday evening for what promises to be a great new event. For entries and event information; https://geelongcycling.com/event/race-4-summer-crit-series-torquay/?instance_id=8328 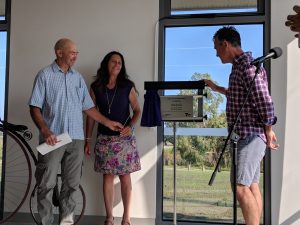