Sixty riders, eighty kilometers of racing, 600 meters of climbing, a large bunch finish, 0.023 seconds separating the first two riders, the 2015 Ross Bush Memorial Handicap was one hell of a race. The Annual race that honours the late Ross Bush who was tragically killed while out training 18 years ago was unusually raced in near perfect conditions, cool temperatures and light winds.

A small but cooperative limit bunch got things underway, sharing the load and riding consistently over the first part of the race. Next back the 5th SCR (scratch) were working well together, 3rd SCR were flying and quickly picked up 4th SCR to form a super group. A hugely talented and well credentialed SCR bunch set a searing pace which caused the group to split early on.

After the first of two circuits the groups were closing up and the question onlookers were asking who would survive the climbs of Pringles Rd & Thomason road before being caught by the chasing bunch. Limit still had a healthy break with young Jachob Dynes, Daniel Keane & Callum Brown still working well together, many were asking will they be caught.

Coming down Maude/ Steiglitz road with only the final 18K circuit to race it was looked like it was going to be a close finish with less than 4 minutes covering the whole field. Limit still leading and what was left of SCR were setting an unrelenting pace and now had everyone in sight on the long straight country roads. There was no soft pedalling in any bunch as everyone still felt like they were in with a chance of victory.

With less than 10K to race you could almost throw a blanket over the whole field. 5th SCR had caught limit and Travis Edwards was doing a massive turn to try and help his bunch stay way. But now SCR and some willing riders in 2nd SCR who had joined forces it meant trouble for the rest of the field. After making the final left turn into Robbs Rd to the finish line the race was now all together. It was to be a high speed drag to the line. As the lead car appeared from the dip in Robbs Rd a huge bunch appeared searching for the line. The long steady drag to the finish meant timing your sprint is paramount. Footscray Club Champion Dom Dudkiewcz (SCR) lead to the line with current Melbourne to Warnambool and reining Ross Bush winner Oliver Kent-Spark (SCR) & Geelong Cycling Club time trial champ Nick Squillari (SCR) in tow along with the rest of the field. Dom looked like he had it covered only for Oliver to come around in the last pedal strokes and snatch the win by the smallest winning margin on record at an average speed of 41.5+ Kph. Nick hung on for third with Andrew Bonello (2nd SCR) & Taro Malcolm (3rd SCR) rounding out the top 5. Current Geelong Cycling Club women’s champion, Emma Scott (5th SCR) taking fastest female & 16th place overall.

Credit to the GCC handicappers Paul & Mark for ensuring a thrilling finish of riders and spectators.  A third of the field finishing within 25 seconds, the second third within a couple of minutes. Thanks to the Footscary and Ballarat riders who joined us on the day.

Oliver is now the first back to back winner of the race, with club hoping he can go back to back in the Warny in a months’ time.

Many thanks to all the officials and race marshals who assisted on the day. Huge shout out to Belmont Barkers Delight, Kylie & Sean Clark and the other junior parents for the outstanding post-race spread, it is becoming the stuff of legend!

The juniors had a change in racing format for the Ross Bush event. A team’s event when race on the track is commonly referred to as an, “Italian Relay”. Four teams, each with 3 riders were put together. Each team having an U11, U13 and an older junior rider. The aim of the game was to complete 3 laps of a circuit as fast as possible while dropping the slowest (youngest) rider off at the end of each lap. Working together as a team was the aim of the game to complete the course in the quickest time possible.

The junior riders displayed great team work, constantly encouraging each other as they rode, working hard to shield the younger members of the group from the wind.  Well done to all the kids that took part. 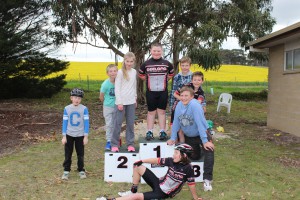