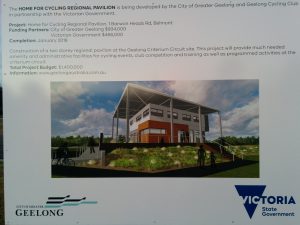 Fantastic news, construction has started on the new ultra modern $1.4 million Cycling Pavilion at the Belmont Criterium Track. It is due to open in January 2018. Joint funding by the Victorian Government and City of Greater Geelong was approved on 9th October 2013 after “Council funded the feasibility study from the Community Priority Fund after extensive consultation with the Geelong Cycling Club.” Congratulations to Geelong Cycling Club President John Burtt for his role on the Steering Committee in making this vision become reality.

The new Pavilion will become the hub of Geelong Cycling Club and the general cycling community in Geelong. Parents will be able to watch in comfort their children train and race. The building will also house historical memorabilia that trace the history of the club and the history of cycling in Geelong from Russell Mockridge to Sir Hubert Opperman and more.

There are no upcoming events.