A part of the Geelong and District Community since 1911

The 2019-20 Summer Racing Program is now available for download.

Keep an eye on the Event calendar for individual race details closer to their date and we look forward to seeing you all out there.

Check the calendar for all the upcoming events.

Racing returned to Winchelsea for the first time since 2014 with competitors and spectators turning out in numbers to make the most of a sunny Good Friday. We had an impressive 43 competitors roll out making for some exciting racing across all grades. C grade saw a good field line up boosted by several riders promoted from D grade. Nick Lanham made the early attacks utilising the hill on the back straight in an attempt to split the field. He was soon reeled after the bunch worked together to shutdown his move. For the bulk of the race most riders pulled steady turns with only 2 or 3 dropped in the final kilometres. The race came down to a bunch

Ross (Bushy) Bush had a very laid back demeanour in every facet of his life. He came from a cycling family, raced as a junior and worked his way up through the ranks. His Dad was a race referee, judge and commissaire. His brother Peter was also a very good cyclist. Ross represented Australia in the Oceania Games with distinction. He rode many open classics and the SunTour on numerous occasions. He was a very talented & an accomplished all round cyclist who committed himself and trained very hard for the big races. He won many club races in A grade and got fastest times off scratch on numerous occasions. He had a lot more to give the cycling world

The 2018 Geelong Cycling Club Criterium Championships we raced in ideal conditions at the Belmont Island Criterium Track. All junior age groups and senior grades had the opportunity to win their respective races with the winner of the combined A&B grade race to be crowned the Men’s 2018 Criterium Champion. Women, C & D Grade got racing going. A good size field in the D grade kicked things off with relatively calm racing in the early stages. Colin Smith was keen to mix things up going off the front early, with the bunch willing to let him hang out on his own for a number of laps. In time the race was all back together, but it seemed that a

GCC AGM – Thursday 17th of March @ Home of Cycling Pavilion, Belmont 7:30pm. What it’s all about; Your cycling club can only exist if members are willing to volunteer some time and lend a hand with it’s running. GCC is in need of further assistance from the membership. Come along and find out how you can help, get a wrap up on the last years achievements and the current financial position. A snapshot on a few of your current committee members contributions Tony Ross – 2 years as Handicapper, 2 years on General Committee Danielle Bridger – 5-6 years Junior Coordinator, 2.5 years Secretary Jon Miro – 2 years Membership Manager Sean Clarke – 1.5 years Track Coordinator, 5 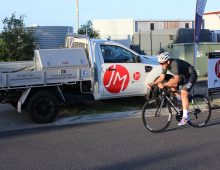 The Inaugural JM Homes Torquay Criterium, race 4 in the Summer Criterium Series was raced in ideal conditions on Saturday evening. Large fields in all grades and an abundance enthusiastic supporter on the sidelines made for a wonderful event with some aggressive and spectacular racing. The GCC juniors got first look at the new course, enjoying the wide-open roads. Fraser Clarke taking the win just ahead of Xavier Starling. A large D Grade field hit the start line, including a few first timers racing with GCC. It also great to the three female starters in the race, Madeleine Starling, Emma Keogh & Georgie Mervin for her first race. As has been the pattern in D grade of late, racing was 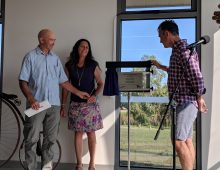 2018 has started off with a bang, the grand opening of the new home of cycling and some great racing in the first 3 races of the new year. Below is a snap shot of the racing so far; Race 1 – Belmont A fabulous evening at the Belmont Criterium Circuit with the grand opening of the new Home of Cycling Pavilion. A significant day in the Geelong Cycling Club’s long history. After a ceremonial lap of honor the 2018 racing season kicked off. There was a great crowd on hand for the occasion with a large group of juniors getting things underway. The hot conditions saw many red faces but some close racing. Xavier Starling the first across the 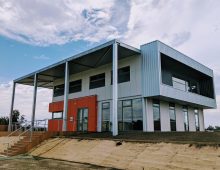 Saturday 27th of January marks a significant milestone in Geelong Cycling Club’s 100+ year history with the official opening of  brand new home of cycling club rooms at the Belmont Island Criterium Circuit. We encourage GCC members and all cycling enthusiasts to come down and be part of the celebration. The opening ceremony will begin at 5pm with the first race of 2018 to follow after. Anyone interested in having a race for the first time are welcome. Please contact the club; info@geelongcycling.com for more information. Pre race entries can be done here.

There are no upcoming events.