The 2018 Geelong Cycling Club Criterium Championships we raced in ideal conditions at the Belmont Island Criterium Track. All junior age groups and senior grades had the opportunity to win their respective races with the winner of the combined A&B grade race to be crowned the Men’s 2018 Criterium Champion.

Women, C & D Grade got racing going. A good size field in the D grade kicked things off with relatively calm racing in the early stages. Colin Smith was keen to mix things up going off the front early, with the bunch willing to let him hang out on his own for a number of laps. In time the race was all back together, but it seemed that a number were willing to wait it out until the last few laps. John Miro & Michael Carter seemed to be spending a bit of time on the front past the start finishing line. It was Eugen Czulij that lead the bunch through at the bell, Mark Woodhead close behind coming off a big week’s charity riding around the state. However, it was Colin Smith who got the early jump on the last lap to take the win with a celebratory fist pump crossing the line. A fast finishing Sasa Jurkovic left his bid for victory just a little late finishing just under a second behind with the consistent Michael Bell 3rd. Race average speed a little under 35kpH proving the depth in D grade has grown considerably throughout the season.

A small field in C grade, but all riders weren’t prepared to cruise around at a leisurely pace consistently swapping off turns throughout ensuring a high average speed at just under 37kph for the race. At any point there was a lull in pace Steve Douglas would stick his nose on the front to ensure the speed was maintained. Given the high average pace it was destined to come down to a last lap dash and rounding the final bend it was anyone’s to win. In the desperate lunge to the line Adrien Limsowtin took the narrowest of victories from Marco Bramucci by just 0.062 seconds. Greg Mervin 3rd under a second back.

Two starters in the women’s event so they set off along with D grade. Georgie Mervin won solo from Danni Bond. Georgie getting plenty of time to work on her self-confessed weakness, going around corners on the twisting Belmont circuit while using her TT skills to maintain a good average speed.

The U15 & U11 kids hit the track next racing over the short course. The under 15’s had a cracking race. Not only were all riders willing to share the pace making duties, there was no shortage of attacking throughout the race. Coming into the final laps the boys were still together. Henry Atchison found himself on the front down the back straight on the last lap allowing Fraser Clark to launch his attack with Bailey Wilson the only one to follow. Coming around the final bend and the long sprint to the line Fraser had opened up a small gap that he held to the line taking the win. Luke Neale was no closing fast but Bailey held on for 2nd by just 0.016 second. Henry rolled in 4th after paying for his effort on the last lap.

The Under 11’s saw 3 riders start, including 2 girls. Racing was controlled but small gaps between riders soon developed. The sibling rivalry between Fabian & Imogen Hall saw a bit of a power struggle for the race lead, ultimately it was Imogen that powered ahead, while Fabian may have been regretting the hour long warm up he did before the race. Charlotte Wilson got into her work as the race went on but left her run too late to catch Imogen who stayed clear to take the win, Charlotte 2nd with Fabian coming home 3rd. A solid 24kph average for the winner.

While the championship event was on, the U17 & U19’s battled it out for their respective titles. Harry Clark (U17) & Lincoln along with Ben Woodhead and Kane Bridger (U19). A good race ensued with the Clark boys breaking away from the other two midway through the event. As the time ticked by Kane & Ben split leaving them both to time trial their way to the finish. Up front the bragging rights at home were on the line. It was Lincoln who stole the march around the final bend getting enough of a gap to hold off Harry despite his finishing speed honed on the track. Kane 3rd & Ben 4th across the line.

The final race of the day was the championship event, raced over 50 minutes and 3 laps of the 2.1K Belmont Island Circuit. A good size field of A & B grade riders would battle it out for the title. It was a quiet but solid start with a sharing of the pace making duties. It was all too comfortable for the ever-aggressive Nick Rhodes, who set off solo for a number of laps, but it had little effect on the bunch who slowly reeled him back in. As the laps ticked by there were a number of breaks off the front, Tom Paton & Kris Hinck formed a dangerous combination and later the pair were joined by Jarrod Bailey, which could have spelled race over for the rest. However, there was still enough horsepower in the bunch and despite some splits the trio was reeled in and bunch largely reformed.

The average race pace was still in excess 40kph on the twisting Belmont circuit and coming to the last 3 laps of the race there was still a large group in contention as all the attacks in the race thus far were neutralised. No deceive moves were made in the last stages and at the bell riders jockeyed for best position in what looked to be a bunch sprint. However, Travis Edwards had other ideas launching a long-range break off the downhill ramp on the back straight, past club criterium champion Kris Hinck was quick to get on his wheel and the trio had a handy break. Rounding the S’s at the top of the course Kris had an untimely mechanical and hit the deck curtailing his bid for victory. Travis who was on his wheel had to go off circuit to avoid a collision and despite still coming onto the finish straight in the lead had lost all momentum and was swallowed up by the chasing bunch. Out of the final bend and as the straight opened up Jarrod Bailey unleashed his sprint. He was not seriously challenged taking a clear victory ahead of Brad Frost who rode well thought. Ash Leone (B grade) crossed the line in 3rd place continuing his rich grain of form. Pat Kelly who was active throughout was 4th overall and 2nd in B grade. The unlucky Travis Edwards was 5th ahead of Tom Paton. Matt Ough road a smart race throughout rounding out the B grade podium.

In all it was a wonderful days racing. Thanks to all riders and supporters that got along to support the event. Full event results can be found at the links below; 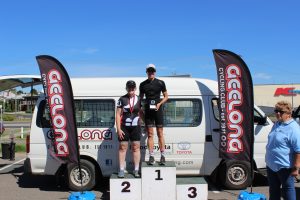 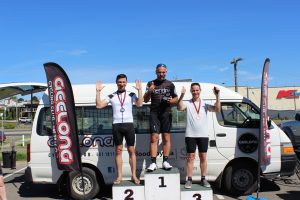 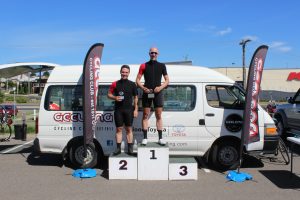 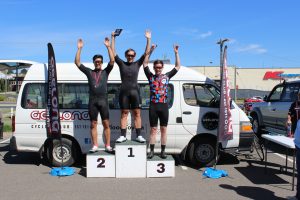 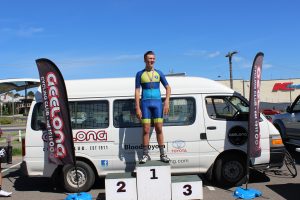 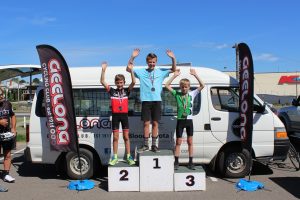 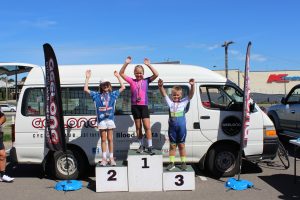